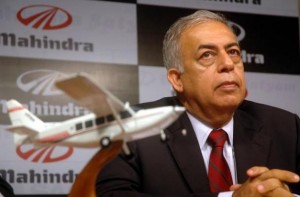 Mahindra Aerospace, the aircraft and components manufacturing arm of Mahindra group, will start producing the first eight-seater aircraft in India in the next two years.
“You can expect that within a time-frame of two years, we will have a full-fledged eight-seater aircraft being manufactured in India,” said Hemant Luthra, President of Mahindra Systech — of which Mahindra Aerospace is a part, during the inauguration of its new aerostructure manufacturing facility.
The company presently manufactures eight-seater — GA8 utility aircraft, in its Australia-based companies Aerostaff and GrippsAero which it acquired in 2010 to get into the aviation sector.
It has so far exported from Australia around 250 planes, which are used for tourism, humanitarian aid, adventure sports and other activities in the US, Canada, Europe and other countries.
Mahindra is also producing 10-seater GA10, which is under certification process and is likely to available for commercial operations by 2014. The company is working on development of 18-seater GA 18.
Inaugurating the facility, Mahindra Group CMD Anand Mahindra said he aims to turn India from “a global consumer in aviation sector to global producer” and the manufacturing facility was an attempt to make India’s entry into the global aerospace industry and “leave a footprint in global aerostructure supply chain”.
“It is the first aerostructure facility (in private sector) in India. Our utility aircraft are capable of landing in rugged terrains where no one has reached. It will be like our Mahindra jeep, which used to tread rugged terrain without roads and where no other vehicle used to go,” Mahindra said.
There was immense opportunity for the aircraft business in India as around 100 million pilgrims, 100 million holiday goers and businessmen could benefit with small aircraft, which shows the immense potential for the aircraft, Luthra said.
Elaborating the future plans, he said the Rs 150 crore plant would be a service provider for multiple original equipment manufacturers (OEMs) and has received RFQ (Request for Quote)from them. “We would be like to progress from build-to-print towards design-to-delivery offerings in the future.”
Mahindra Aerospace has collaborated with Spanish aerostructure manufacturing company Aernnova Group to get the stringent certification for export to European countries and also get into the defence sector.
Government is looking for components for its fighter aircraft, helicopters and other defence aircraft, which is around $20-40 billion proposition, he said, adding that of this, at least 20 per cent should go to local business and “we are looking at that opportunity.”
The state-of-the-art 25,000 square metre aerostructures manufacturing facility, has the ability to accurately craft large, complex sheet metal parts using CNC routing (a computer controlled shaping machine), stretch-forming, bladder press, heat treatment and other specialised equipment.
The facility also features a fully-automated surface treatment line, priming and painting capabilities for parts and assemblies and nearly 10,000 square metres of space for the manufacture of major airframe assemblies and sub- assemblies.
With its comprehensive mix of capabilities, the facility is intended to assist OEMs and Tier 1’s mitigate concerns on single-point responsibility for cost, schedule and quality of deliverables, Luthra said, adding that the new plant was currently in the process of gaining industry-standard AS9100C and NADCAP accreditations, alongside stringent quality approvals.
“It is also investing in skilled aerospace sheet metal, special processing and assembly workers, and will generate significant employment as operations ramp up over the next five to seven years,” Luthra said.
SOURCE : PTI
technical study of MNM stock

if we look at the price chart we can clearly see that stock started some up move now.
it has given a positive convergence signal at recent bottom and same was confirm at level of 865.
another pattern we can observe is “ASCENDING TRIANGLE” keeping upper range at 900 level so if price able to give close above 900 for 2 trading session then we can see up move till 960-1000 also.
even RSI able to give up move on chart and still not moved into over bought zone, so if it able to take support at down lines then we can surly expect up move in stock.
so as per current chart development if price able to close positive near 860 level then only take position here now, {only if it gives green bar on daily chart on support line}
or
if able to close above 900 then we enter there with a target of 950-975 support level to consider at 850
one can also remember that as per the current chart development if it able to give negative close below 850-860 range for 2-3 trading session then fall also to expect in price.
← Previous Post
Next Post →