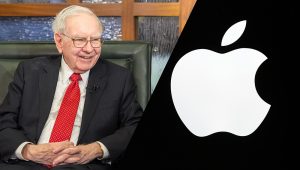 (AP/photo illustration IBD) WUMT02_aapl_051616_ap Berkshire Hathaway Chairman and CEO Warren Buffett talks while being interviewed with Microsoft co-founder and Berkshire board member Bill Gates, in Omaha, Neb., Monday, May 2, 2016, during an interview with Liz Claman on the Fox Business Network. The annual Berkshire Hathaway shareholders meeting took place over the weekend in Omaha with more than 40,000 in attendance.

Warren Buffett, chairman and chief executive of Berkshire Hathaway Inc bought about 123 million shares of the company alone in 2017 when the U.S. Markets are making new highs everday. He is betting big time on American Phone maker Apple and really appreciate Apple, Ceo, Tim Cook for huge amount of hard work and innovation in 2016. Soon after quarterly results announced on 31st Jan 2017 he had become more aggressive on this technology giant bringing the total number of shares owned by Berkshire Hathaway to 133 million. Berkshire Hathaway now owns 2.5% of Apple. Apple is the most valuable public company in the world.
Warrem Buffett, who recently announced in a press release that Berkshire Hathway had bought about $20 billion in stocks since just before the Nov. 8 U.S. election, also said the U.S. stock market was cheap with interest rates at current levels. He still believes that Fed will keep interest rate at lower levels for some more time.
Warren Buffett also disclosed Berkshire’s positions in Airlines remained unchanged. He said pricing shares of airlines has historically been a “very tough game” and that he had never met the chief executives officers of any of the four airlines in which Berkshire holds stakes.Warren Buffet in his letter also told that Berkshire Hathway has $86 billion cash on hand and are consistenly looking for acquisitions but that there was “nothing close.”

1). Top Analyst and Senior Management at Berkshire Hathway has recommended Wareen Buffet about the Market Leadership and future prospect at Apple Inc.

2). Second thing Warren Buffet believes that when price is right you can buy the stock. So at $136 and climbing, Apple shares are much pricier today than they were when Berkshire started accumulating its stake last year. During 2016, the stock price ranged from a low of $90 to a high of $118. Still, many analysts say the price gain is deserved due in large part to the high retention rates and customer loyalty among iPhone buyers.

3). Warren Buffet is also bullish on aplle stock due to milestone moment this year marks the 10th anniversary of the iPhone. Also technology industry and market experts is also expecting big things when Apple unveils the IPhone8 latest version of the mobile device.