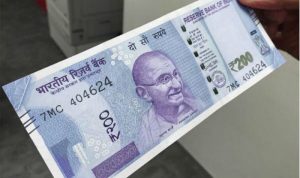 Are you tired of receiving higher denominations of Rs 2,000 and Rs 500 notes? Still Rural India is facing lots of issue under demonetization where Automated Teller Machines (ATM) are also without cash or giving out Rs. 2000 notes. The Reserve Bank of India (RBI) has came out as a saviour for Indian citizens by clearing the proposal of printing Rs 200 notes around June 2017. But still it has to pass through the central government to launch the new currency denomination.

The Reserve Bank of India has approved a proposal to introduce Rs 200 notes in the country, reported on Tuesday.  Once that is done, the new denomination notes will start being printed around June. If it gets green signal from Central Government it would be the second new denomination of currency to be introduced after the government had demonetised Rs 500 and Rs 1,000 old currency notes in November 2016. The Rs 2,000 note had been introduced, but there has been a shortage reported of smaller denominations in the economy.

After demonetisation, a new version of the Rs 500 and Rs 2000 notes with higher srcurity features was announced. According to Reports RBI is in process of printing new Rs 10 and Rs 100 notes as soon as possible. RBI chief Urjit Patel had said around Rs 9.2 lakh crore in new notes was introduced into the economy after demonetization. It is also believed that RBI was keen on introducing revamped Rs 1000 notes with enhanced security features and design but when media tried to confirm from RBI they declined to introduce new Rs 1000 notes in near future.

Prime Minister Narendra Modi had also set a huge milestone of increasing transactions through digital payment methods to 25 billion rupees this year to reduce black money and fight parallel economy. There are no plans to demonetise the new Rs 2,000 currency notes, the government said on Wednesday, scotching “rumours” to this effect. National Investigation Agency (NIA) has seized 22,677 new Rs 2,000 notes worth Rs 4.53 crore from Gujarat and West Bengal.