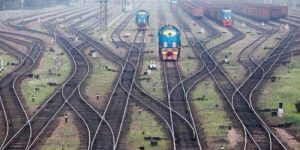 Jindal Steel and Power Ltd (JSPL) provided 35,000 tons of rails to the Indian Railways amid July to October, an organization official said in a press release.

In July, the organization had grabbed away 20 percent of Rs 2,500-crore worldwide rails tender carried by the railroads, becoming the first private company to supply rails to the national transporter.

The request is to supply around 1 lakh huge amounts of rails over a time of one year. “As on October 31, 2018, we have provided 35,000 tons or 35 percent of the request after RDSO (Research Design and Standards Organization) approval. It’s solitary three months and we have provided more than 33% of the request,” N An Ansari, CEO, JSPL Steel Business, said.

Till now, the national transporter was procuring rails from government-owned SAIL. JSPL was the only Indian steel maker in the fray, and was expected to get an assured order of 20 per cent under the ‘Make in India’ clause.

The railways had invited the global tender for procuring around 4.87 lakh tonnes of rails to meet the supply shortfall from state-run SAIL. In the tender invited earlier this year, seven foreign steel companies and JSPL from India had submitted bids.

JSPL is the only private company that produces rails in India. It was already supplying rails to various countries such as Iran and Bangladesh. The company operates the country’s most advanced one million tonnes per annum (MTPA) rail mill at its 3.6 MTPA integrated steel plant in Raigarh, Chhattisgarh.

It can manufacture single piece rails of up to 121 metre. SAIL produces rails at its Bhilai Steel Plant in Chhattisgarh. The railways had decided on an extra global tender after anticipating that SAIL would not be able to supply the 7,17,000 tonnes required for 2017-18 and 2018-19, as estimated at that time.