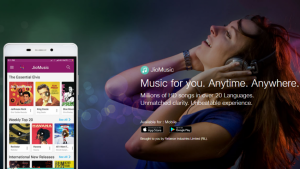 Reliance Jio subscribers would enjoy seamless access to the integrated app and will also get a 90-day extended free trial of JioSaavn Pro, the streaming service’s premium product.

Reliance Industries Ltd which few months back acquired India’s leading music streaming service Saavn and also announced to merge JioMusic and Saavn into one.RIL bought Saavn for $104 million and also reported plans that it would be merging the two entities into one. The new app is called JioSaavn (no surprises there) and is downloadable on all app stores, including the Jio app store and JioPhone. JioSaavn is now currently valued at over $1 billion, said the company in a statement.

JioSaavn are planning to roll out new features such as lyrics, concerts and live events, and video over the next few months.

The service is offered in a freemium model where basic services are offered for free with advertisements, while other premium features have to be paid for. Jio users would get a 90-day free trial of JioSaavn Pro, the paid service. Paid plans are available for 1 day, 7 days, 1 month, 3 months, 6 months and 1 year. The monthly plan costs Rs 99, similar to the subscription prices of most music streaming services for monthly plans, including Google Play Music, Hungama, and Amazon Music. The annual plan on JioSaavn costs Rs 999.

JioSaavn features content from 14 India languages, including Rajasthani, Haryanvi, Punjabi, Tamil, Telugu, Kannada, Malayalam, Assamese and Odia, among others. It is also available on the website. Saavn was always available on a website, but JioMusic was tied down to a Jio phone number and could not be downloaded on another operator number.

Like Saavn, JioSaavn will continue to feature original programming and Artist Originals. Under Original Programming, Saavn featured podcasts such as ‘NoFilterNeha’ and ‘Kahaani Express with Neelesh Misra’. Artist Originals was introduced in 2017, it releases songs and tracks by South Asian artists and producers. Here’s a look at some of the original programmes on JioSaavn:

JioSaavn is currently employing 200 people and operates out of five offices in California, New York, Bangalore, Gurgaon, and its headquarters in Mumbai. It offers 40 million tracks in 15 languages and has over 900 label partnerships, including with Universal, Sony, T-Series, Tips, YRF, Saregama, Eros and Warner Music.