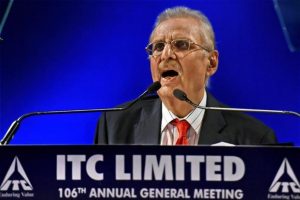 YC Deveshwar was one one of India’s longest-serving business stalwart with over 20 years at the helm as the executive chairman and chief executive officer at ITC Ltd till February 4, 2017.

ITC group Chairman Y C Deveshwar passed away today on Saturday morning at the age of 72 after a long illness. Deveshwar was living by his wife and son.

YC Deveshwar, ITC’s longest serving business tycoon, passed away today at a private hospital in Gurugram Saturday morning after a long illness, according to company sources. Deveshwar (72), who stepped down from his executive role in 2017 but remained as a chairman in non-executive capacity, spearheaded the diversification of ITC to an FMCG company. Sanjiv Puri, the new CEO and MD of the company who toked charge two years back, extended his condolences.

“We deeply mourn the passing away of Y C Deveshwar. In this hour of profound grief and sorrow, we recall with respect and pride the legendary stewardship he provided to ITC over two decades as its Chairman. Inspired by a patriotic fervor, manifest in his clarion call of ‘Lets Put India First’, he led ITC’s strategic thrust to create an exemplary Indian enterprise dedicated to serving national priorities,” he said in a statement.

West Bengal Chief Minister & Trinamool Congress chief Mamata Banerjee posted the news on her official Twitter handle. “Saddened at the passing away of Y C Deveshwar Ji. He was a giant in the corporate world. I have many memories of him as a distinguished captain of industry. Condolences to his family, his colleagues and his admirers,” she said.

In 2011, Government of India honored Deveshwar the Padma Bhushan, India’s third-highest civilian award. Deveshwar was one of India’s longest-serving corporate chiefs with over two decades at the helm of ITC.

Deveshwar joined ITC in 1968 and was the godfather of its revolutionary transformation from a tobacco company to an FMCG (fast moving consumer goods) giant.

He became Executive Chairman of the company in 1996 and grew revenues from Rs 5,200 crore to more than Rs 51,500 crore. Deveshwar also battled British American Tobacco (BAT) to ensure that ITC remains an Indian company.

Born on February 4, 1947, in Lahore, Deveshwar studied at Indian Institute of Technology (IIT) Delhi before taking a management course at Harvard University. Between 1991 and 1994, Deveshwar led government-owned Air India as the Chairman and Managing Director.He than was also a Director on the Central Board of the Reserve Bank of India (RBI).

In Feb 2017, Deveshwar stepped down as the Chief Executive Officer of ITC Ltd and was serving as a Non-Executive Chairman.

Today’s ITC, therefore, is not just defined by its cigarette brands — India Kings, Classic and Goldflake — but is also identified by Sunfeast (cookies and biscuits), Bingo! (snacks) and Aashirvaad (staples and ready meals).

Deveshwar’s main core philosophy and goal was to build the top line; his pride was in building Top class ‘Indian’ brands. He was often heard referring to ITC as India’s Trademarks Corporation.