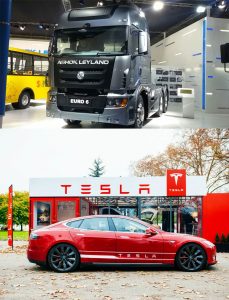 Ashok Leyland has made it clear that they are open for partnership with Elon Musk for selling Tesla Motors in India and which will also fulfill Indians dream to experience Tesla autonomous cars of the future.

Tesla Motors has already in past made couple of announcements that they are soon entering India Automobile Market with the launch of Model 3 which will be priced around $ 35,000.

Tesla CEO Elon Musk in past who has been moving back and forth on his India dream for a couple of years and has now been unable to take the next big step of entry into India but now there is an official invitation from Ashok Leyland commercial vehicles.

Elon Musk main goal is to make India as its next big market, but there are lots of concerns that will the electric car ever be running on the bumpy and poor quality of Indian roads?

Recently Elon Musk in couple of its interviews that his company has drafted plans to create a ‘partial presence’ in India, Africa, and South America by the end of 2019 and other goal is to expand further in 2020.

“We’re open to Musk’s offer. I really believe it’s not just one partner that can contribute to India’s electric car dream. Multiple agencies are going to be involved in this. We’ll be lucky to be part of that consortium, “Natarajan told IANS in the financial capital on the sidelines of the recently concluded AWS India Summit.

“I’m going back to the philosophy and culture of the organization. Whenever we see new technology, we like to try it out, just like a little kid who sees a new toy and wants to experiment with it. We’re open about adopting technology — anything that adds value to our customers,” Natarajan noted.

Rating agency ICRA recently upgraded with stable outlook the long-term rating of Ashok Leyland’s fund-based limits to AA from AA. The agency believes that the financial profile of Ashok Leyland will continue to be healthy supported by stable demand outlook for the segments of medium and heavy commercial vehicles and light commercial vehicles (LCV).

It is reportedly considered as India’s largest bus manufacturer and the world’s fourth largest, the company reported an massive jump of 10 percent in domestic vehicle sales in April 2019 to 13,141 units. In the same month last year, the commercial vehicles company had sold 11,951 vehicles in the domestic market.

“At the end of the day, we need more money. We’re in the business of making money. As long as we can make more money and help our customers generate more money, we’re gambling with every new technology,” Natarajan said.