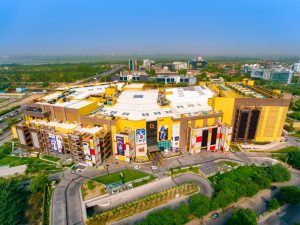 The new mega real estate project, a retail and commercial-led mixed-use development to be known as Down Town, will be constructed on a 23-acre land area owned by DLF in Gurgaon. The plot is situated on the highway opposite DLF’s 2.5 million sq ft commercial project Cyber Park.

“The retail mall will be part of this 8 million sq ft project that will also have component of serviced apartments, five-star hotel and commercial development. The project will be developed in two-three phases in more than five years,”.

The new project development to be executed through DCCDL, and is expected to surpass the country’s current largest retail development 2.5-million-sq-ft LuLu International Shopping Mall in Kochi and DLF’s own 2-million-sq-ft Mall of India in Noida.

The DLF-GIC joint venture was articulated in end of 2017 after the promoters of the realty firm K P Singh and his family had sold their stake in rental arm DLF Cyber City Developers Ltd (DCCDL) to the Singapore investment firm.

DLF has already identified certain assets and land parcels for transfer to DCCDL and has been in talks with GIC for the same.

In one of India’s biggest transactions to help build a property investment platform, private equity player Warburg Pincus a month ago went into a $1-billion coalition with Mumbai-based real estate developer Runwal Group to fund retail-led mixed-use projects across the country.

Renting activities in real estate retail segment has been on the massive rise and a few unmistakable shopping centers are seeing powerful demand for more space from leading brands.