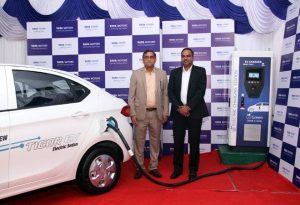 Tata Power is gearing up to install 500 Electric Vehicle (EV) charging outlets across five metro cities in India over the next one year as the integrated power company is getting ready with the infrastructure for the transition to battery-powered vehicles.

Tata Power Managing Director and CEO Praveer Sinha told Business Line that the charging stations are being installed in Delhi, Mumbai, Bengaluru, Pune and Hyderabad. In Hyderabad, the company is working with fleet owners.

Currently in India most Electric Vehicle owners have been charging from their residential or commercial properties. “However, as the adoption goes up, there will be a huge demand and requirement of slow and fast charging,” he said. The Centre recently also reduced the GST rate on Electric Vehicles to 5 per cent from 12 per cent earlier and has made EVs affordable for consumers with additional income-tax deduction and rebates.

The government of India is in process to up the ante for Electric Vehicles sales as the country is far behind China, the United States and Europe in the world. Industry watchers opinions is that if the government target of seven million electric vehicles by 2020 is to be achieved, then the cost has to come down and the ecosystem such as battery-charging points need to be in place.

“For us, EV is beyond just electricity vending. We are putting together a mechanism to source energy in such a way that it is available in large numbers, in real time,” said Sinha.

Our understanding of power business will help us provide answers to complex issues: CEO

For example, he said, if 20 or more cars come to a charging station and each car requires 15 kilo Watt for fast charge that is almost 1 Mega Watt of power (to put it in context, a a data centre uses up 1 MW). So, the question then arises, how to move this load in real time from different sub-stations. This is where Tata Power is using technology to make its networks cater to power requirements consistently and dynamically.

“Also, we plan to come up with an app that can tell the user which station has larger number of fast-charging options available, what is the cost of charging at peak, off-peak hours. Our understanding of the power business will help us in providing answers to such complex questions,” said Sinha.

The car-maker announced a tie-up with Finland-based clean energy major Fortum to install the country’s first 50 kW DC fast-charging EV station, ahead of the launch of its SUV EV later this year.

Meanwhile, there is an lots of ongoing debate going on for adoption of a single standard for charging, to reduce costs drastically around charging infrastructure. Currently, there are three global standards, Japanese, Chinese and European, and according to reports, India will be developing its own standard.