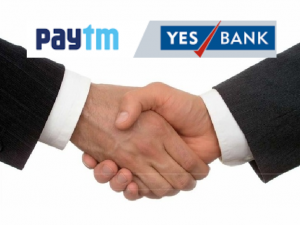 Digital payments giant Paytm is in ‘preliminary talks’ to buy Yes Bank stake. If sources related to the case are to be believed, the talks are still in the initial stages. The final decision on the deal is still delayed, as it will require a lot of regulatory approvals. “There is no statement from Paytm yet.

According to the news of Times of India, what kind of deal it is, negotiations are going on for it and a lot will depend on the approval of Reserve Bank of India (RBI). Actually, Paytm Payment Bank is already running under the ownership of Vijay Shekhar Sharma and One 97.

Vijay Shekhar Sharma, founder of Paytm and mobile content company One97, also owns Paytm Payments Bank Limited (PPBL) and will have to seek the permission of the Reserve Bank of India (RBI) before a deal with Yes Bank. In the initial negotiations, Paytm has shown interest in purchasing the stake of Yes Bank co-founder Rana Kapoor, who holds a total of 9.64 per cent stake in the bank along with his associates.

Rana Kapoor and his family have a 9.54 percent stake in Yes Bank. The Kapoor family has a stake in the bank through Yes Capital and Morgan Credits.

According to the news, Paytm founder Sharma is currently evaluating the profit and loss of the deal. Apart from this, they also have to consider other regulatory factors like approval from the Reserve Bank. In fact, according to the rules, institutional investors are allowed to buy only 5% stake in a bank. To take more than this, separate approval of the Reserve Bank has to be obtained.

Yes Bank chief executive officer (CEO) and managing director Ravneet Gill said the sale of the stake with the global technology company was “under negotiation” and that it was “close to a deal”. Though talks are on to buy less than 10 per cent stake, it can be extended further, as no one can hold more than 15 per cent stake under RBI rules.

In 2015, Rana Kapoor lost a legal battle with his relative Madhu Kapoor in a bank board appointment. After this, he had to resign as the CEO and MD of the bank. The family of Rana Kapoor and Madhu Kapoor has a total stake of 17.97 per cent in Yes Bank. If this deal happens, for the first time, a digital payment company will buy a big stake in a commercial bank in the country.

According to sources, all aspects of this deal are being considered. Yes Bank’s condition is not very good and there is pressure on it to raise capital. The bank has had to increase the provision for the loans stuck in its books. Last month, Yes Bank raised Rs 1,930 crore through a Qualified Institutional Placement (QIP).