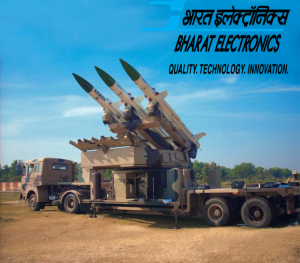 Defence PSU Bharat Electronics Limited (BEL) has signed a contract with the Ministry of Defence, Government of India, on September 13, 2019, for procurement of Seven Squadrons of Akash Missile System for the Indian Air Force.

This is a turnkey contract with specialist infrastructure. The total value of the contract is Rs.5,357.00 Crores (Rupees five thousand three hundred and fifty-seven crores only) and the delivery will be completed in 3(three) years. These systems will be commissioned at seven Air Force locations spread across Pan India.

Quick Reaction Surface-to-Air Missile is a missile developed by the Defence Research and Development Organisation in association with Bharat Electronics Limited and Bharat Dynamics Limited for the Indian Army.

The Indian Navy has developed Software Defined Radio (SDR) Waveform algorithms for defence use. This makes the SDR system highly safe and secure. Implication is that a soldier in field can stream live video from his helmet cam to Delhi. A huge shout out to the Indian Navy, DRDO and Bharat Electronics Limited.

In possibly the first sale of BrahMos supersonic cruise missiles to another country, Thailand is in talks with India for their purchase, official sources said. A few other countries have also expressed interest in BrahMos but nothing has fructified yet. “Negotiations are on. It may not happen this year, but most likely next year,” diplomatic sources said. While Thailand expressed interest in the missiles some time back, discussions picked pace after the visit of Royal Thai Navy Chief Admiral Ruddit to India in December last year.

As part of the expanding defence cooperation between the two countries, Thailand has made a request for repair and refurbishing their Dornier maritime patrol aircraft. “A joint team of Indian Navy, Bharat Electronics Limited and Hindustan Aeronautics Limited visited Thailand in mid-June to discuss the issue,” a defence source said.