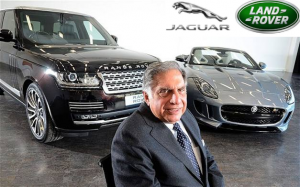 Tata Group had acquired JLR from Ford in 2008 for $2.3 billion. The Indian salt-to-software conglomerate has been planning and eastablishing strategic options for JLR, including a potential stake sale, people familiar with the matter have said. Tata Group has initially denied the rumours.

Whatever poison Jaguar Land Rover inflicted upon itself from China, it has now infected her parent company in India. It seems Tata Motors has some serious soul searching to do about JLR if it wants to survive, never mind competing in the emerging competitive Indian electromobility market. Tata is in a fight for its life with JLR, and both may have to part ways.

Tata Motors is now seeing the benefits of having made investments in multiple new models. Its home market has contracted in recent months yet Tata sales have expanded for three months straight, including September. This comes at just the right moment for the company, as by contrast, its JLR division is in trouble in many markets.

Tata Motors is in trouble. The stock crashed 30% after a write-down. The company blamed #China’s slowdown for lost market share. Then, the truth – JLR is too dependent on small-city buyers. Investors are losing confidence in the last couple of years.

This is how car brands will die with the soon coming next round of the car brand mass extinctions in the emerging but shrunken electromobility car industry. Tata Motors Shuts Down Factories In Pune, Jamshedpur. Mahindra Pleads Govt for Help To Stop Mass Layoffs. Maruti Terminates Temp Workers, First Time Ever in History.

The Auto Sector is undergoing a serious slowdown, a lot of it is owed to the lack of growth in the economy – since last month 350,000 people have been laid off in the sector. The sector is in deep trouble.

Its about time our Government initiates steps to revive the current situation as it is the biggest contributor to India’s Manufacturing GDP. Immediate action is needed.

The fate of NANO (People’s Car) Nano which was launched in January 2008 was the brainchild of Ratan Tata, Chairman of Tata Sons. Tata Motors turned the dream (Having a personal Car) of every middle class into reality. Nano courted trouble from the very beginning. The change in the production facility and other safety issues were among the few. But the love this car received is unmatched. I love the journey that nano made from the start.

Because of JLR missteps in China, JLR and Tata had to absorb an insane amount of debt that has now compromised Tata’s credit and bond ratings. At a time when car companies need financial and market stability, plenty of cash to convert to all electric to remain competitive, and with a market that frankly can do without another luxury brand, this is certainly not a good place for Tata to start electric. Tata motors trading at it’s 8 year low is a clear indication that things are gloomy for the company, with Jaguar Land Rover it’s British subsidiary posting one it’s biggest losses in it’s history. With the falling JLR car sales in the Chinese market, Brexit issues, Diesel engines issues and laying off 4500 of it’s staff.