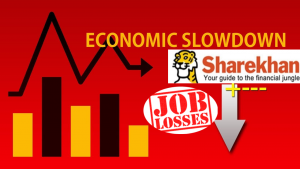 Sharekhan, the retail broking arm of BNP Paribas, has asked over 400 employees to quit the leave and the company, said people familiar with the development. A shift to online broking model and shrinking revenues have prompted the brokerage to cut staff cost, they said.

In response to an email query, a Sharekhan spokesperson said about 350 employees have been asked to quit.

“Our business is evolving to meet the more complex needs of our clients, including through the provision of value-added advisory services where we have been hiring. In line with our clients’ expectations, we have also moved to provide more digital services,” the company spokesperson said. “Through this digitization and restructuring, which is ongoing and will continue in a phased manner over the next few months, around 350 colleagues are impacted.”

The firm did not comment whether more employees would be asked to go. Industry officials said Sharekhan had a staff strength of about 3000 employees before the latest round of sacking. This could not be independently verified.

Mrs. Nirmala Sitaraman maybe a decisive women, but totally incompetent to lead the massive size of Indian Economy. 90% Businessman in India are facing recession and legal problems. Banks and Businesses and jobs are closing down because of this ministry.We will witness the 2008 crisis in India shortly. Amidst the worsening job crisis, fresh engineers in India are struggling to find work according to their profile.94% of engineers graduates aren’t getting hired as per their qualification.

An adjustment in Sharekhan’s development system from an franchise based model to a digital platform set off the conversations at the firm. Insiders said the customary broking model was attempting to stay productive in light of solid challenge from discount broking firms.

In the franchise model, Sharekhan was witnessing huge crisis to comply with the rules, which was dictated upon by its French parent BNP. Sharekhan was acquired by BNP in November 2016 from a bunch of private equity firms.Industry officials said rising costs and falling revenues are squeezing broking firms.

“The cost, especially from the tech side and compliance related, has gone up drastically in the last few years while the yield has dropped massively because of the discount broking firms,” said Arindam Chanda, CEO, IIFL Securities. “Further, the carnage in mid- and small-cap stocks since January 2018 has forced retail investors to sit on the sidelines.”

While the Sensex has soared around 15 per cent since January 2018, BSE’s Mid-cap and Small-cap indices have plunged 19 per cent and 30 per cent, respectively, during the same period.

Stock broking firms have been facing big time crisis in the past several quarters because of adverse market conditions. Motilal Oswal Fiancial Services’ trailing 12-months net profit was down by 46 per cent while Geojit Financial Services reported a massive decline of 61 per cent in the trailing 12-months ended June 2019. Emkay Global’s net profit declined over 70 per cent in the 12- months ended June 2019 over the corresponding previous period.

Bringing down the corporate tax is undoubtedly a breakthrough move. Is it sufficient or correct at this point?

The problem of the present is that the companies are dying due to the cash crunch. There is a set of companies making huge profits and using it to make them bigger and using automation to derive more profits instead of creating more jobs. The tax incentive will make these companies more powerful and create a monopolistic environment in India. The need of the hour is to flush the economy with money so that we can have opportunities for all not just big companies. I am afraid the move will not yield results in the direction sought after.