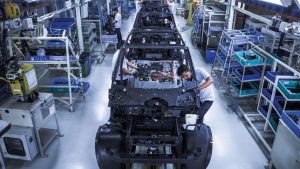 Mahindra Electric Mobility today on 15 November inaugurated its electric vehicles technology manufacturing plant. It is set up with a investment of Rs 1 billion in Bengaluru.

The organization stated, with the new office, it’s manufacturing capacity will increment to 25,000 units for every annum.

“We were told that we were making a big mistake by betting on battery powered vehicles,but I had to.”
Anand Mahindra, M&M executive chairman.

Branded under the umbrella of +ME technologies, the facility will manufacture battery packs, power electronics and motor assembly which are integral part of an electric power train, the company said in a statement.

“When we made the Scorpio, the company’s future depended on its success. But for the country as a whole, and for the industry as a whole, electric vehicle is a much bigger deal than Scorpio”.
Pawan Goenka, managing director, Mahindra & Mahindra.

“The plant uses global standards of manufacturing processes and will increase the manufacturing of Mahindra Electric to 25,000 units per annum,” it said, adding that the facility would create additional direct employment of around 200 people.

Mahindra and Mahindra Managing Director and Chairman of Mahindra Electric Pawan Goenka said, “The manufacturing hub is the next step by Mahindra in the electric technology space to increase local value addition and bring affordable electric vehicle (EV) technology to redefine mobility in India.”

Mahindra Electric CEO Mahesh Babu said the company is aiming to bring about a “monumental change in the way India moves by enabling more EV products on the road through our +ME technology solutions”.

The organization has now put resources into innovations that are center to EVs and have set up assembling of battery packs, engines, control gadgets in the new office at Bengaluru.

“The government of Karnataka has been extremely supportive of this initiative,” he added.