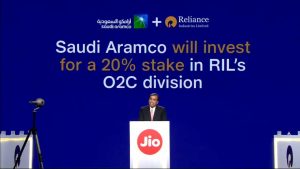 Saudi Aramco to buy 20% stake in Oil-to-chemicals division of Reliance Industries for $15 billion. Amazon was in talks with Reliance to buy 26% stake in its retail network. BP to pay close to $1 billion for 49% stake in Reliance’s fuel retail network.

India’s second largest company in Market Capitalization is really looking for something big.

Aramco will explore 13 million barrels every day and has already got long term partners in place.

Reliance creates history again. Biggest ever FDI deal with Saudi Aramco. Aramco Looks to Diversify With Stake in India’s Reliance. Saudi Aramco is buying a 20% stake—worth some $15 billion including debt—in India’s Reliance Industries’ oil and chemicals business, a move that could diversify its business and comes as it gears up for its first earnings call ahead of a planned IPO.

Too high a valuation. Don’t know the metrics used, but I’d reckon they have done some sort of cooking and knowing how the Saudi’s operate, I think they’re hiding a lot of things pertaining to the deal which could be bad for Indians.

With reliance, it is exploring into high tech downstream business given Reliance has one of the highest gross refining margin per barrel in the world while commitment of 500-700k barrels a day.

“The link currently operates well below capacity, but the long-planned expansion will give Saudi Arabia the option to ship more oil from the Red Sea rather than the Persian Gulf, bypassing Hormuz.”

By passing the strait of Hormuz has been on the table for some time. Will Aramco finally get around to completing the project.

1). when it comes to critical infrastructure risk management building in redundant transport links makes sense. Oil is Saudi’s number one export commodity and top revenue earner. We’ve seen the problems in the US when pipeline capacity is restricted – the product is discounted.
2). why has the project been delayed. The number one export market is east towards Asia. The strait of Hormuz represents the shortest shipping route and most of the oil fields are located in the east which reduces transport cost.
4). Why does an east west pipeline reduce risk. If the export market is predominantly the west towards Europe and North America then yes it makes sense. If the oil is going to the east it must travel south towards Yemen where Saudi is leading a coalition against the Iran backed Houti. Could tankers be targeted?
5). How relevant is Saudi oil for Western markets. With reference to the US imports from Saudi and the middle East have declined in favour of oil from Canada, Mexico and Brazil. It’s part of the US strategy to rely less on middle east oil although Saudi owns Motiva one of the largest oil refineries in Texas.

With their 100 billion investments in Softbank vision fund, their investments would probably grow faster than their booK.

Great news for Saudi Aramco to grow internationally and to bolster its downstream portfolio!

“The Strategy of the future“ – Following the footsteps of majors like Aramco! Right pathway to take.

Now, even India’s richest man could not let go of the opportunity. Despite having one of the most profitable and valuable business, Reliance Industries is keen to deleveraging its existing portfolio and focus more on sectors / brands that can be customer re-engaging and increase value manifold!!!

Big news for India! Industries that directly and indirectly support the O&G sector will be making a bee line for India. Mumbai, Ahmedabad, Kandla and other ports and airports are going to get busier which in turn will translate into more people & cargo movements.

This pie generally is more alluring to #entrepreneurs. But Proven Industrialist betting big on this is a Wow!!! Atleast for the spirit!!!

#Saudi Arabia underlines the challenges faced in reducing its heavy #economic reliance on oil. Is it rewarding enough or not, that let’s leave to the future markets and analysts. Great news for Saudi Aramco to grow internationally and to bolster its downstream portfolio!