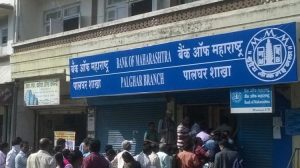 The state-owned Bank Of Maharashtra (BoM) has recently closed down 51 of its branches across the country as part of ‘cost-cutting measures’ being implemented in the scandal-hit banking industry.

The bank, on Monday, announced that it has closed down and merged these 51 branches for public convenience.

According to a senior official from the bank, the affected branches were in urban centers and have been identified for the action as they were declared nonviable and were incurring huge losses and overhead costs.

All 51 units have been closed down and merged with neighboring branches, the official of the Pune based bank said. The Bank of Maharashtra has around 1,900 branches all over India.

The shutdown is effective from October 1. The closed branches were in urban areas, with the bank choosing not to shut branches in rural regions.

According to the same report, the shut branches have been merged with other branches in the area.

This is the first such measure initiated by any public sector bank in Maharashtra. But Public sector banks, have, in the past shut down branches in other countries to improve their operational efficiency.

The IFSC Code and MICR codes of these branches have also been cancelled and all the savings, current and other bank accounts have been transferred to the branches with which they have been merged.

All customers have been directed to deposit their cheque-books issued from the closed branches with the old IFSC/MICR Codes by November 30, and collect their payment instruments bearing the new branch’s IFCS/MICR codes.

The Bank of Maharstra cautioned that since the old IFSC/MICR Codes have been spiked and shall be discontinued permanently from December 31, the customers, henceforth, should conduct all their banking transactions only with the new IFSC/MICR Codes.