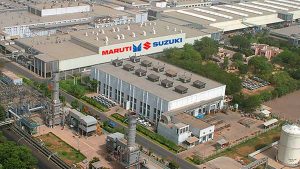 New Delhi-headquartered firm Maruti Suzuki is all gearing up to offset CO2 emissions to the tune of over 5,390 tonnes on yearly basis, for the next 25 years; the annual production capacity of this solar power plant will be 7,010 MWH

Maruti Suzuki India, India’s largest car manufacturer, recently made an official announcement that it would invest around Rs 24 crore to set up a 5 MW solar power plant at the Gurugram facility to harness solar power to meet its energy resources. The plant will complement the power generating capability at the manufacturing plant.

“The company recently laid the foundation stone for a 5 MW Solar Power plant at the Gurugram facility. The captive Solar Power plant is expected to be commissioned in FY 2019-20,” Maruti Suzuki India said in a filing to the Bombay Stock Exchange.

This is Maruti Suzuki second grid based solar power plant. The company had established the first solar plant in 2014 at Manesar, with 1 Mega Watt capacity. In 2018, this plant was further upgraded to 1.3 Mega Watt.

The car maker said that the power generated from the solar power plant will be strategically integrated with the captive power plant to meet the internal energy needs of the Gurugram facility.

According to the company, the photo voltaic solar panels of this carport style solar power plant will work as a roof at the new car parking area. While the solar panels generate clean energy, the cars parked underneath will be safe from strong climatic conditions, it said.

Commenting on the development, Kenichi Ayukawa, MD & CEO, Maruti Suzuki India Limited, said, “Solar energy is abundant, versatile and efficient. This Solar Power initiative is in line with the Company’s philosophy to adopt environment friendly technologies and lower CO2 emissions. Through this solar power plant facility we will harness renewable energy for our business needs over next 25 years. Maruti Suzuki is committed to expand its environment care initiatives in products, in manufacturing processes and in business operations.”

He further added, Maruti currently generates 95 per cent of its overall energy from cleaner and renewable sources. The energy requirement at the manufacturing facilities is met by natural gas-based captive power plant, supported by grid power.

Maruti Suzuki setting up factory for Lithium-Ion battery in Gujarat

Among its other energy-saving initiatives, Maruti Suzuki has installed solar rooftop plants to provide LED street lighting at Rohtak Research and Development facility and Gurugram plant. The Rohtak facility also has variable refrigerant flow air-conditioners. The facilities in Gurugram, Manesar and Rohtak use energy-efficient LED lighting.