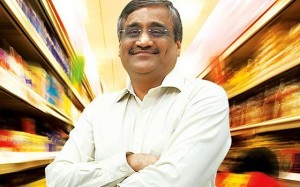 Future Retail’s current debt stands at Rs 4,500 crore and chief executive Kishore Biyani aims to make it debt free over next two years.
Big Bazaar Direct to have 250 outlets by Oct-end: Biyani.
Future Retail Limited, formerly Pantaloon Retail (India) Limited, is a multi-format retailer. The Company is the flagship company of Future Group. It operates multiple retail formats in both the value and lifestyle segments of the Indian consumer market, including Pantaloons, Big Bazaar and HomeTown.
Big Bazaar Direct, which aims to cater to 60 percent of untapped Indian retail segment, is likely to have 250 franchisees by October-end . Future Group chief executive Kishore Biyani told CNBC-TV18 that via this new venture, the company is planning to sell 1,800 stock keeping units (SKUs) in the beginning and will is looking to sell high margin products like electronics and general merchandise. “We have created a brand new supply chain to deal with delivery to the consumer directly. So it is not absolutely an e-commerce model. We believe we will be able to cater to a lot of India, which would have not been possible with physical retail,” he elaborated. Meanwhile, he said that the company’s flagship Big Bazaar doesn’t require additional funding as of now and would roll out 35 stores in the next one year. Future Retail ’s current debt stands at Rs 4,500 crore, Biyani added that he aims to make it debt free over next two years.
Kishore Biyani remained unfazed by the challenging times. He is in fact confident that the business will grow more than two-fold by March 2014.
The company, which has a debt of Rs 1400 crore on its books, will also be paring down debt through divestment in its brands in the immediate future. The company expects to realize Rs 400-450 crore from the sale of its 26% stake in Biba, following which divestments in other brands will follow. Biyani does not see any challenges on the debt side. But given that customers have curtailed spending, especially in discretionary categories, analysts feel Biyani’s sales target is fairly ambitious.
On October 21, 2013, Future Retail closed at Rs 79.75, up Rs 1.70, or 2.18 percent. The 52-week high of the share was Rs 275.75 and the 52-week low was Rs 63.30. The latest book value of the company is Rs 143.47 per share. At current value, the price-to-book value of the company was 0.56.
technical chart of FRL

if we can see technical chart of this stock, we can see that after big fall recently stock has done consolidation for almost 4-5 months.
it has almost made “SYMMETRIC TRIANGLE” pattern on chart, in which price able to move above triangle  at 80 level.
rsi also rising now, and planning to move in overbought zone, as it able to move above resistance level.
so if stock cross 82 level then we can see 95-105 level coming in this for short time.
← Previous Post
Next Post →