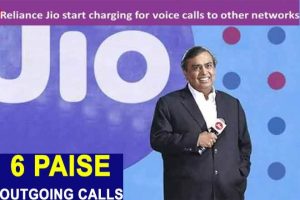 Reliance Jio has gone back on its 2016 promise to keep voice calls free. India’s only profitable telcom companies has started charging 6 paise per minute for calls to rival networks, though it will compensate users with additional data. Jio said it was “compelled” to take the step following the telecom regulator’s decision to review the January 2020 deadline for scrapping Interconnect Usage Charge – the company has so far paid nearly ₹13,500 crore in IUC charges to other operators. Analysts said Airtel and Vodafone Idea are likely to follow suit, potentially ending the era of zero voice tariffs.

I am surprised that people are surprised with Reliance Jio deciding to charge for calls. Any and every promise comes with T&C. The economics of FREE isn’t real and those who expected lifetime free services clearly don’t understand how the world of telco operates. Also, Jio has rightfully compensated with extra #data for the extra charge of 6paise – the fact is, users love more data!

Separately, what most are also missing is that prime focus for Reliance Jio till now has been #data & not so much of #voice – so while a marginal set of customers may migrate to other networks, but let’s not expect any significant changes on user base & consumer behavior cause of this.

Reliance Jio ‘First Day First Show’: Jio Studios to produce 52 movies in a year will release to release one movie every week

Lastly, what telcos truly need to do is to be laser-sharp focused on the next-generation devices like Internet of Things and capitalize on its industrial use-case + invest in both consumer and enterprise applications cos that can be sold as part of offerings – essentially go up the value chain.

But to say Jio needs to be boycotted or they have missed on corporate ethics or the like is over dramatizing the entire episode. Such tactics are as old as the world of business and advertising and it’s us customers who need to be smarter about consuming such claims.

Is this finally JIO’s true color coming out? Their USP of free call over VOLTE is finally been proven wrong and now they are back to consolidation mode?

Indeed there are lot of wealth creation opportunities especially at the base of the Pyramid in a country like India.

Reliance has always acknowledged this, especially in the Telecom sector. Precisely why JIO could grow at a tremendous pace by giving freebies.
The middle and lower income starta forms the largest base in JIOs portfolio. But this group is also price sensitive and has elastic demand.

With Jio asking the users to pay 6 paise per minute, it would be interesting to see how the customers react.

Either JIO will end up losing its base, or this base would start giving missed calls and Airtel and Vodafone-Idea end up paying more to JIO.

So yesterday, #Jio reneged on its promise of offering ‘lifetime free voice calls’. Jio users will now have to pay 6 paise/min as IUC for calls made to other networks. It also said that it had been compelled,”reluctantly and unavoidably” to take this measure due to policy changes.

Well, technically, that’s not true. Nobody’s holding a gun here and there is no regulation forcing Jio to recover these costs from users. But before we discuss any of this we need to understand what an IUC means?

Whenever Jio places a call to another network, say #Airtel, it has to pay an Interconnect Usage Charge (IUC). And considering Jio made voice calling free there were a lot of calls originating from their network. By some estimates, Jio spent ~830Cr(net) on IUC b/w Apr’19-Jun’19

This was a burden and it had to go. The only reason why Jio waited for so long is that there was a lot of talk about TRAI wanting to abolish IUC, earlier this year.

Unfortunately, that hasn’t happened because the likes of Vodafone and Airtel have been lobbying hard to ensure IUC remains untouched. Because if it goes, they’re likely to lose all the millions Jio is currently paying them

The one who started the “free calls” has made the inevitable U Turn. It was never a matter of “IF” but rather “WHEN”.

It’s not fair game. We have reached the place where we consumer have only to pay for data not voice call. It’s a sign of reverse trend.

Jio will now charge users 6 paise per minute on calls to rivals’ networks. It’s cheating on the part of Jio which announced that all calls for life time will be free. How can TRAI be muted spectator. They should intervene in the matter. We already have pre paid plans declaring all voice calls free forever.

So what do you think TRAI will do now? Will it finally take a call?